Nene is a young girl with large magenta eyes that have orange/yellow accents. Her waist-length hair is a light cream color, which gradually fades into a soft teal green at the tips and is styled with baby bangs at her forehead. She wears two dark brown magatama hair accessories on the side of her head, which pulls back some of her hair. Occasionally, Nene wears other hairstyles such as braids, ponytails, and twintails.

Her hair color matches her signature nickname, which is "radish" due to her fat radish-like legs. Her ankles are drawn thicker than the other characters in the series.

Nene's Kamome Gakuen uniform consists of a cream-colored sailor dress, which reaches her knees and has a scalloped hemline. The lining of the skirt is a deep magenta while her collar, cuffs, and pockets are all brown with cream details. Her collar bow is the same color as her dress and includes brown stripes; Nene also attaches her personal skull brooch above the bow. Nene sports her regular uniform cream-and-orange uwabaki slippers but chooses to wear dark brown tights with a small half-moon pattern near the ankles instead of the usual brown knee-length stockings.

During the Tanabata festival with the supernaturals, Nene styles her hair up and dons a white yukata with large red floral patterns, tied with a red obi. She also wears a white cloth on her head (hitaikakushi) provided by Hanako to disguise herself from the supernaturals in the festival as to not cause trouble.[1]

In the beginning of the school orientation, Nene was seen to have shorter hair trimmed to her shoulders as she took a picture alongside her parents. Kamome Gakuen's middle school uniform for girls is slightly different than the high school's with longer sleeves, dark base colors, and knee-high socks with leather shoes.[2]

Due to a curse she received after she ingested Mermaid scales,[3] Nene turns into a betta fish whenever she comes into any contact with water. In her fish form, she has deep, round eyes and light pink scales that fade into teal on her tail and fins. She has two small brown horns that mimic her magatama and retains her ribbon with a skull brooch. Her fish form is considered to be very beautiful by the Mermaid Servants.[4]

When she's not fully turned into a fish, her body simply getting wet can cause Nene's pink fish scales to appear. The scales disappear after being dried.[5]

While possessed by Hanako,[6] Nene retains virtually the same appearance. However, her eyes appear sharper and are similar in appearance to Hanako's eyes, as well as her hair being more straight. Nene's soul turns into a ghost while it is separated from her body.

During a dream, Nene finds that she has been turned into a Mokke. She still dons her magatama and skeleton brooch, however the other Mokkes greet her all the same as one of their kind.[7]

Recurring from Chapter 67, Nene was used as a substitute for the sacrifice occurring in Sumire's village. She was dressed in a pink variation of Aoi's kannagi appearance, which has similar details between the two. She wears two dark pink flowers in her hair, a light pink coat, and a pink hakama.[8] 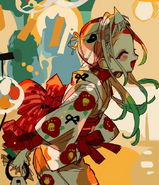 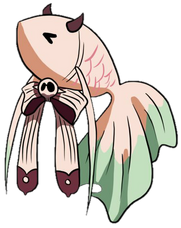 Nene's appearance when possessed by Hanako.

Nene's appearance as a Mokke.

Nene's appearance as a sacrificial maiden in Volume 13.

Nene is a very outgoing and earnest girl who seems to greatly desire the approval of her peers. She is generally kind to others, sometimes to the point of naiveté. She genuinely wants to help those around her, and is even willing to risk the dangers of associating with supernaturals in order to do so. Because she is often reliant on Hanako to protect her from dangerous supernaturals and developed a habit of calling his name when she is in need of help, Nene wants to find a way to protect Hanako and her other friends.

However, Nene is also rather insecure, particularly about her ankles and whether or not people actually like her. In addition, she is a hopeless romantic who easily falls for charming looks, which have led her to many poor experiences with men. Nene intensely desires for a boyfriend, even going through desperate measures such as attempting to call Hanako to grant her wish and recklessly using a matchmaking supernatural item she isn't familiar with. Due to her past crush expressing interest in girls with "feminine" traits, Nene worked to become adept at cooking, sewing, and gardening as an attempt to impress him.[9] She worries that she is not lady-like enough to ever find a boyfriend and is afraid of heartbreak.

During the search for a Clock Keeper, Hanako slips into Nene's body and possesses her, causing her to emulate Hanako's mischievous personality. This "Nene" is more bold and tries to seduce Akane Aoi, much to the real Nene's dismay.[6]

Nene is able to see supernaturals, such as Hanako, without having any prior affiliation with them. This is later revealed to be a result of her being near the Far Shore, with only about a year left her in her lifespan.[10]

After ingesting the Mermaid scale, Nene's skin turns to scales whenever she is in contact with water. Additionally, she transforms into a fish if her body is completely submerged. By being bound to Hanako in a contract, she is able to stay in her human form outside of water. Occasionally, her scales will fall off and can be used as a rare currency in the supernatural world.[11]

Retrieved from "https://hanako-kun.fandom.com/wiki/Yashiro_Nene?oldid=22999"
Community content is available under CC-BY-SA unless otherwise noted.