Jibaku Shounen Hanako-kun (地縛少年花子くん, Jibaku Shōnen Hanako-kun?), also known as Toilet-bound Hanako-kun in English, is a 12-episode TV anime adaptation based off of the manga of the same name by AidaIro, to be aired starting January 9, 2020 on TBS, SUN, CBC, and BS-TBS channels. The official English dub of the series is licensed by Funimation and is being released on their website.

An anime adaptation was officially announced in Square Enix's GFantasy magazine's April 2019 issue.[2] Its official twitter account was launched on the same day.

The anime's official site opened on July 12, 2019 and revealed a teaser visual along with that Studio Lerche is in charge of animation production, with Masaomi Andō directing the series, Yasuhiro Nakanishi handling series composition and script, Mayuka Itō as character designer, and Yūji Higa as its producer.[3]

Hanako's character design was revealed on October 9, 2019, with silhouettes for Nene's and Kou's designs. These were revealed a month later on November 9 in conjunction with the Animate Girls' Festival 2019, and the website was revamped with a new key visual and additional information. The main voice cast was revealed to be Ogata Megumi (Hanako), Kitō Akari (Yashiro Nene), and Chiba Shōya (Minamoto Kou). Broadcast timings and an advance screening for Episode 1 were also announced.

(Note: This is an unofficial English translation of the synopsis from the website.)

It's said that Hanako-san is in the third stall of the third-floor girls' bathroom in the old school building, and will grant any wish of the person who summons them. The method of summoning is simple: knock 3 times. And then–––

To have her wish granted, occult girl Yashiro Nene has summoned Hanako-san. But the ghost that appeared before her is a boy.

"Hanako-kun". Nene gets involved in all sorts of supernatural stories by Hanako-kun, who's sadistic and slightly-- perverted despite being a ghost. Will Nene ever be able to lead a peaceful school life again? A heartwarming comedy that no one has ever seen before begins now...

The first promotional video was released on November 9, 2019, with Ogata and Kitō voicing Hanako and Nene respectively.

Say, do you know? The most famous rumour among the 7 mysteries in this school…

In the 3rd stall of the female toilet on the 3rd floor of the old building, it's said that there's a supernatural who'll fulfil your wish in exchange for something important.

Hanako: "I'm a supernatural, the 7th of the school's 7 mysteries: Hanako-san of the Toilet. Nice to meet you!"

Will you summon "Hanako-san of the Toilet"? 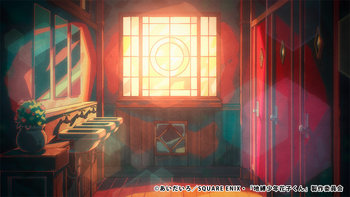