Tanizumi Riki
Minamoto Kou (源光) is a student at Kamome Academy's Middle School Division and a member of a renowned family of exorcists, the Minamoto Clan.

He wears a black shirt underneath his teal Kamome Gakuen Middle School uniform with brown stripes, which is sometimes left unbuttoned. He also sports a cream-and-brown striped tie that occasionally hangs untied around his neck and a red sweatband on his right wrist. Kou is always seen wearing a red traffic-safety amulet (omamori) as a piercing on his right ear.

Kou keeps his raiteijou―a spirit staff―around with him at all times as a weapon and disguises it as a black umbrella when he is not using it. Currently, Kou cannot use the staff's full power because it has been sealed by Hanako.[1]

Kou's older appearance was caused when the third Clock Keeper and First School Mystery representative, Mirai (coined by Aoi Akane for "future"), used her powers on him, fast-forwarding his time to adulthood. Unlike the other humans who became elderly, his spiritual ties to the Minamoto clan limited his power. It is noted by Akane that he holds a strikingly similar resemblance to his older brother, Minamoto Teru, ultimately becoming Nene's type, although she dissuades herself from falling in love with his appearance. His new appearance also causes some fright to Hanako, who is scared of Teru and his violence.[2] 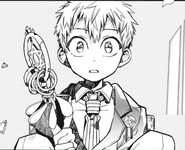 Kou is cheerful, direct and tends to jump into things headfirst without properly thinking them through. However, he has been shown to grow more mature as the series progresses.

He is often misjudged as a bit of a delinquent or rude, but this is actually not the case. He is rash and loud but is also simultaneously very kind and caring. He makes a distinct effort to be polite, as seen when even though he was about to face off with Hanako upon their first meeting, he still took the time to be polite to Nene and warn her about the perceived danger.

Kou was also kind and open-minded enough to revise his opinion on Hanako and became friends with him, despite the pressure from his older brother to exorcise the ghost and the brothers' long-held belief that all supernaturals are bad.

He is very loyal to his friends and helps them in any way he can, no matter the danger. He is also easily flustered and sometimes makes mistakes due to rushing into things too quickly.

Being from an ancient clan of exorcists, Kou is able to see supernaturals and interact with them (such as touching them and talking to them) without needing to summon them, unlike normal human beings who cannot talk or see supernaturals unless they summon one.

He is also able to use his raiteijou to turn his spirit energy into lightning that can effectively counter supernaturals, though it has been mentioned that he has no idea how to use the spirit staff’s power consequently leading to him being electrocuted every time he uses it.

Retrieved from "https://hanako-kun.fandom.com/wiki/Minamoto_Kou?oldid=22289"
Community content is available under CC-BY-SA unless otherwise noted.