The manga started in July 2014. It currently runs in the monthly magazine GFantasy, and is being published by Square Enix.

Yen Press has licensed to digitally release the manga in English, with the official translated title being Toilet-Bound Hanako-kun. Elex Media has licensed the manga for an Indonesian translation, under the title Hanako Si Arwah Penasaran.

As of April 2022, the manga has 17 volumes in print in Japanese, 16 digital volumes in English and 13 print volumes also in English, and 15 volumes in Indonesian.

A special volume, titled Volume 0, was also released. The volume contains pilot chapters of Jibaku Shounen Hanako-kun before it was officially serialized, and AidaIro's debut oneshot, Dear My Living Dead.

An anime adaptation by studio Lerche was announced in April 2019, and aired in 2020's winter anime season.

At Kamome Academy, rumors abound about the school's Seven Mysteries, one of which is Hanako-san. Said to occupy the third stall of the third-floor girls' bathroom in the old school building, Hanako-san grants any wish when summoned.

Nene Yashiro, an occult-loving high school girl who dreams of romance, ventures into this haunted bathroom... but the Hanako-san she meets there is nothing like she imagined!

Kamome Academy's Hanako-san... is a boy! 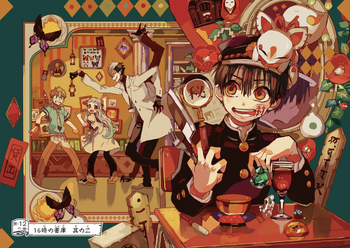