Disconnected (as a ghost)
Deceased (as a human)

He resides on the third floor girls' bathroom, in the toilet of the third stall. Hanako also governs over the Seven Mysteries as School Mystery Number 7.

Hanako is a short boy, standing at roughly 150 cm (4'11") tall[2] with choppy black hair and large, amber irises that resemble a crescent moon.

Hanako wears the old Kamome Gakuen male uniform, a black gakuran with gold buttons, white collar and red hems, a white, long-sleeved western shirt underneath, black shoes, and red socks. He also wears a black hat that has a white underside, a gold emblem, and red strings along the front seam to match his uniform. Hanako is often seen with and commands two hakujoudai—mysterious white fire-like orbs— with red and green circular cores respectively. On his left cheek, Hanako wears a white seal with a red-colored kanji for seal (封) written.

Occasionally, Hanako is seen wearing a long, flowing black cape that covers his shoulders and chest and matches his usual outfit. The cape has a gold and red collar with clasps and a red underside. His cloak also neutralizes spiritual lightning.

As a human, Hanako was seen wearing the old Kamome Gakuen school summer uniform: a white short-sleeved western shirt with black pants, belt and white shoes. He was often covered in bruises and bandages. There used to be a cotton gauze on his left cheek, similar to where his seal would be.

Hanako's appearance as a young boy was perceived to be of grade-school age with little differences from his current form. He wore the casual festival attire of a dark yukata, ranging from dark teal to blue. There are cloud and moon designs imprinted on the fabric as well. His dragon-like mask is worn on the side of his head, and it is a teal-green color. In addition, he carried a purse strung around his neck and wore a pair of open-toed sandals.

During the Picture Perfect Arc, Hanako wore the current Kamome Gakuen high school uniform, which consisted of the usual teal, short-sleeved shirt with brown stripes on the sleeves, and a cream-and-brown striped tie, plus black pants and blue-and-white shoes.

Hanako during the Picture Perfect Arc. 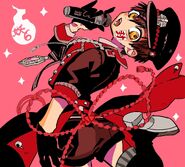 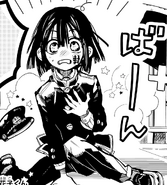 Hanako's female appearance from the spinoff.

Being the seventh school mystery and the leader of the Seven Mysteries, Hanako maintains the balance in the relationship between humans and supernaturals of the school, and is often seen helping others around. Hanako is cheerful, outgoing, and likes having fun. As a ghost, he is rather mischievous, then he enjoys teasing others and can be very playful and pranky. Despite his youthful persona, Yako and Tsuchigomori respect him and follow his orders as fellow school mysteries. He can become very serious at times, but at other times he appears very flippant. Hanako is also a bit sadistic at times, as shown when he happily threatened to turn Yako into fox udon (he often threatens others with his kitchen knife). Yashiro Nene describes him as someone who is difficult to understand.

Hanako's personality is similar to that of when he was human, except for the fact that he was very passionate and knowledgeable about astronomy and dreamed of being an astronaut. However, he no longer talks about the subject. Furthermore, when he was alive at least in the school, he seemed more closed and shy. He doesn't like talking about or being reminded of his past due to the negative associations.

When upset, Hanako tends to find isolated locations such as the rooftop. In the presence of others, he often smiles to mask negative emotions. Though he tends to smile at inappropriate times, seeming not caring about what is happening around him, his actions prove otherwise. He rarely talks about himself and it is hinted that this is because he fears of revealing his past to others. This self-isolation and bottling of his emotions leads to his tendency to make decisions without consulting others. Hanako rarely asks for advice or help when it comes to solving problems, and as such he can be rather callous. He often assumes he has the best answer to a problem and will go through with his solution even if it may come at a very high cost to either himself or the person he is attempting to help. He will even lie to further his goals, which makes him seem rather duplicitous at times.

Hanako has expressed a great deal of affection and concern for other individuals, especially his human companions, despite denying so. He is shown to deeply care about his friends and be especially kind to them, as seen when he constantly helps Yashiro Nene and sincerely apologized when he hurt her feelings.[3] When Nene is tired, he cheers her up with a kiss, and on one occasion he searched all around the school to find the Mokke's hidden trinkets, which included Minamoto Kou's earring. He also opens up considerably with their company even though little is known about him, confessing that his favorite dessert is donuts, which surprised even Tsuchigomori. Despite his affection for his friends and general regard for human life, Hanako can also be apathetic towards those he does not value highly. He is willing to sacrifice or harm others if it would be beneficial to his close friends, particularly Nene, based solely on the fact that he likes her more than those he does not know.

Only bits and pieces of his past have been revealed thus far.

As a child, Amane had suffered from a birth defect where his circulation and heart failed to function normally. During the time of Amane's and Tsukasa's childhood, the current medical system was unable to provide the necessary treatment. Tsukasa usually went out to collect any souvenirs from the garden, including toys, flowers, and a kitten he brought inside the house, until he heard the news that his older brother wouldn't live long for the next month. Thus, it led him to compromise on a wish that costed a heavy sacrifice. Amane miraculously got better on the day of November 25th, which was the day of the twins' birthday, before finding that Tsukasa had already disappeared.

Amane attended middle school at Kamome and had Tsuchigomori as his homeroom teacher. According to Tsuchigomori, Amane didn't have any friends and always came to school wounded ever since his first year at the school. Despite Tsuchigomori's questioning, Amane refused to reveal who the culprit injuring him was. Amane gave Tsuchigomori his "treasure", a moon rock that he believed was from space, and stated that he wanted to go far, but then decided to not go anywhere, hinting about his changed past of dying before adulthood.

Amane's future was written in the books. He was to become a science teacher at Kamome Academy as an adult, but his future changed and he ended up with the fate of killing his own twin brother, Tsukasa, with a knife. Hanako himself died due to unknown causes not long after, tragically becoming a ghost and the only known human to Tsuchigomori (at that time) to change their future.

After becoming a ghost, Amane Yugi became known as Hanako and took up the mantle of the seventh mystery. Far prior to meeting Nene and Kou, Hanako's abilities were sealed by the Minamoto brothers' grandmother, which is likely where the "seal" patch on his cheek came from. Presumably, this means Hanako's powers used to be even stronger than their current state. What event led to his powers being sealed is unknown.

However, he cannot use haku-joudai's powers in a territory commanded by another school mystery without their permission (as seen in the Misaki Stairs), though this can be overcome by destroying the yorishiro. Despite this, Hanako was shown using his haku-joudai's powers in the 4 PM Bookstacks even prior to the destruction of Tsuchigomori's yorishiro, suggesting that he likely has Tsuchigomori's permission to do so. On the other hand, he was originally able to use the haku-joudai in Shijima's false world until she disallowed it by drawing.

The haku-joudai can also be prevented from coming to his aid by barriers, such as the lightning cage created by Teru.

Hanako is physically strong even without the haku-joudai's aid, as seen at the Misaki Stairs, where he was able to temporarily destroy the scissors with a kick and fend its blades off with his knife.

Little has been shown about Hanako's specific powers as No.7, besides being the leader of the Seven Mysteries and bossing everyone else around. However, he is clearly a powerful fighter, to the extent where the mermaid expresses surprise that he is able to drive her back despite having only existed for several decades as a supernatural.

Hanako is able to suppress the mermaid curse on Nene to a very minimal extent, without either of them turning into a half-fish or displaying fish-like characteristics most of the time.

He is also able to place seals on items such as Kou's spirit staff, preventing him from using its full power. Kou has not been able to remove the seal, though Shijima was able to remove it in the false world.

Hanako placed a spell of protection on Yashiro by kissing her cheek, which later became visible with the number "seven" (七) after fending off the Kodama's attack, suggesting that it may be connected to his power as the No.7 school mystery.

During the Faerie incident, Hanako explains that most supernaturals cannot defy from their rumors, or they will eventually disappear from this shore. However, he seems to be exempt from this despite his differences from the Hanako-san legend, and it is unclear if this is related to his power as a school mystery.

As one of the Seven Mysteries, Hanako has a duty to oversee all the supernaturals who exist in the school, and maintain correct relations between humans and supernaturals. Thus, Hanako technically has to eliminate dangerous supernaturals, but he can circumvent this by having Yashiro change the supernaturals' rumors so that they will not kill.

Hanako carries a kitchen knife around as a weapon, which he is able to draw or dismiss at will, regardless of whether he can use the haku-joudai. Though Hanako usually wields the knife in his right hand, he has occasionally used it with his left hand as well.

As a ghost/apparition, Hanako can float over the ground, albeit only for a few metres off the ground.

It is shown that Hanako and Tsukasa share the same technique in sending someone to sleep by pressing two fingers on the target's forehead. In the Perfect Picture Arc, as Brush-chan was painting a message for Nene to read, Hanako breaks it in half to prevent it from writing any more. Before Nene could receive any answer, he swiftly grabs her arm and places two fingers on her forehead until she loses consciousness in his arms.

Hanako is able to erase someone's memory by forming a V sign and touching someone's forehead. This was attempted in Chapter 71 on Nene, but the attempt failed due to Nene's charm protections gifted by Akane Sumire.