The Confession Tree (告白の木, Kokuhaku no ki?) is the fifth episode of the Toilet-bound Hanako-kun anime.

Nene, who received a reward from Hanako-kun since that day, has been paying more mind to Hanako-kun. At that time, Hanako-kun calls Nene to meet after school. He called her to meet up below the tree that is rumoured to have 100% love-confession success rate. Could Nene's first boyfriend end up being a ghost!?[1]

The school is full on unlikely couples thanks to a tree that rumor has it makes any confession made under it succeed. When Hanako asks Nene to meet him there, Nene starts to suspect that he sees her as more than an assistant.[2]

Nene was peacefully daydreaming about her fairytale prince in class before "Hanako-kun" appears, asking, "Do you want a kiss?", causing Nene to suddenly scream "No!" out of bewilderment. The rest of her class turns their attention until she hesitantly excuses herself.

The students are outside in the school garden, tending to the plants and pulling weeds. Akane makes an attempt to show his strength to Aoi by pulling weeds, which Aoi thanks him for. When Akane does his daily love confession to her, it ultimately leads to a dejected rating of just "3 points".

Meanwhile, Nene was filling up her watering can at the outdoor sink. A droplet of water fell on her hand, undoubtedly forming pink scales as usual. She wonders when her body will return to normal, but she dismisses the pessimistic thoughts in exchange for everything good that has happened so far: meeting the cute Mokke, saving Aoi, and receiving a kiss on the cheek from Hanako-kun--which causes her to quickly spin the faucet to cope with her blushing madness.

While walking through the garden with a shrewd expression, she begins to wonder if Hanako-kun actually does like her due to their previous interactions. She thus turns to Aoi for love advice, often commenting on her "popular girl" trait every once and now. She begins to anticipate about Hanako-kun confessing to her despite him not being her type, to which Aoi suggests that he may confess to her under a certain tree, The Confession Tree. Rumors say that it was raised by the god of love, and if you confess your love to someone under the tree, you will be guaranteed to become a couple. Although it's still a rumor, Aoi notes that there have been an increasing number of couples in their school. They also witness a rehearsal between Akane and Yamabuki as Akane practices to confess his love to Aoi.

While Nene was cleaning bathrooms afterschool, Hanako-kun asks her if she wanted to meet him under the big tree in the garden. Nene realizes that he was talking about the Confession Tree, to which Hanako-kun says "Great, that saves time" before settling on the arrangement.

The next school day, Nene hurries to meet Aoi to get some more advice, but stops as she sees her crying. Aoi points to a crowd in the classroom, where Akane and Yamabuki romantically confess their newfound relationship to everyone. Aoi is saddened that Akane picked Yamabuki, but when questioned if she actually liked Akane, she answers that her and Akane were only childhood friends. Although she wasn't able to receive any advice, Nene still meets Hanako-kun under the planned location. She waits in trepidation as Hanako-kun greets her before finally confessing to her. Upon his confession, Nene tears up knowing this is her first time getting one. Until Hanako-kun discreetly whispers to her to reject it. Nene says sorry out of both confusion and pressure, summoning an apparition upon her rejection. The Confession Tree declares that it will help her seek love before being rudely insulted for its creepiness. In response, he attempts to attack Nene but it stopped by the protective charm given to her by Hanako-kun. Protecting Nene, Hanako-kun wields his knife against the apparition before slicing it in half. As the apparition diminishes, the two of them now see the weakened version of the Confession Tree, Kodama.

Hanako-kun then retrieves his journal to brainstorm on what rumors they should make for the Confession Tree and the Misaki Stairs, but Nene remains silent. Upon realization that Nene actually thought the confession was real, Hanako-kun places a hand on her shoulder out of joking spite, but is shocked to find her crying. Nene responds by hitting his head with hers before sobbing out of embarrassment. She questions why he kissed her on the cheek the other day, to which Hanako-kun hesitantly claims it was because she was tired and to protect her from apparitions, before getting slapped because of the misleading.

Nene dejectedly leaves until Hanako-kun catches her by the hand. For the first time, Nene sees Hanako-kun without his hat, silently commenting that he looked like a normal boy. Hanako-kun regrettably apologizes to her. He hugs her, promising that he will stay with her until she stopped crying. Nene realizes that she doesn't know a lot about him despite calling him her friend, and thus, she seeks to learn more about him.

The next day, the two of them are side-by-side with Kou, declaring the other was being pushy and stingy. Nene attempts to gain more information from Hanako-kun for a compatibility test, to which Hanako-kun states she should do it for someone she likes, like Minamoto-san. Nene says she was okay with watching him from the sidelines; beginning a dreamy line of compliments until Minamoto appears behind her. Kou rushes over to Minamoto, exclaiming "Brother!" Minamoto thanks Nene for taking care of his little brother, before his gaze silently lands on Hanako-kun. The two of them then excused to talk in private.

Next to the stairwell, Minamoto scolds Kou for not exorcising the School Wonders once he encountered them. Kou becomes hesitant, reminiscing the number of times Hanako-kun has saved him and Nene, saying he didn't seem like a bad apparition. In response, Minamoto says there is no such thing as a good apparition and declares he will exorcise them himself after seeing that Kou's attempts were disappointing. Kou stops him with worry in his eyes, to which Minimato says he will wait for a little while then.

In the school library, Nene begins to research about the rumors of Hanako-san of the Bathroom, but finds no information avail for the actual Hanako-kun. Her stack of books suddenly topple over onto the floor, and as she stoops over to gather them, a mysterious girl holds a book out to her. She hesitantly thanks her as she meets eyes with the green-haired girl. She silently comments that she looked like a doll and noting her slender legs. The girl notices that Nene has been researching about Hanako-san, and asks if he's the same. Nene is confused, wondering if she actually knew Hanako-kun, before suspecting this could be a scene from a manga: where a mysterious person comes between the pair. Then the girl notes if he's like a cat, mimicking cat ears on her head, before adding, "Greedy, needy, and selfish" as its traits. Nene recalls that Hanako-kun has never been needy with her, and as the girl passes by her, she says if she wanted to learn more about him, then check the fifth School Wonder. But before she could catch up to her, Nene accidentally bumps into a strange person wearing glasses. Quickly apologizing, she heads to the library balcony but she had already disappeared.

The next day, Nene meets Aoi as she was cleaning the chalkboard. She inquires about the fifth School Wonder, and Aoi explains that it was a library that opens at 4 'o clock. It contained three books: white, black, and red. The white books contain the stories of living people, the black books contain the stories of dead people, and the red books are the ones that you should never read.

Near the end of the episode, the mysterious girl and a boy are standing in the broadcasting room until a figure appeared, similar to Hanako-kun, but with two black kokujoudai. 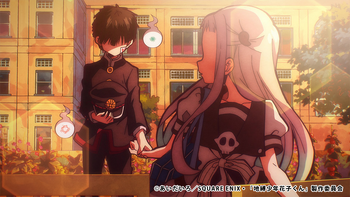 Retrieved from "https://hanako-kun.fandom.com/wiki/Episode_5?oldid=19248"
Community content is available under CC-BY-SA unless otherwise noted.