Now Hanako-san's assistant, Nene is made to clean the toilets practically every day. For someone at the peak of her youth, spending her time cleaning toilets is just torture! She gradually grows suspicious of this Hanako-san. Between all that, many people start losing their belongings in the school, and it seems to be the work of the rumored "Yousei-san"...?[1]

A rash of mysterious thefts hits the school, and rumor has it that the apparition "Yousei-san" is behind it. When Nene catches sight of the creature, will she end up losing more than just her school supplies?[2]

Nene recalls Hanako-kun saying he had wanted a human assistant, but a week later, she actually ends up cleaning the bathrooms afterschool. Begging for Hanako-kun to let her go home, he playfully refuses and says he has an important job for her after this. Nene professes about how youth is short and finally gotten the chance to get asked out by a boy. She romances at the thought of Fuji-kun, the coolest guy in her class, asking her on a rendezvous afterschool. When Hanako-kun inquires about that date, Nene teases at the question before revealing they were just going to organize school council papers in an empty classroom. She also added that Fuji-kun left right away even though he invited her, with her commenting on his shyness. She becomes determined to work her way up, before Hanako-kun implies that Fuji-kun may just have been using her. He whispers in her ear to stay with him, before Nene realizes he had slipped the mop into her hands. Jumping up, she sidelines away from him and prefers to organize papers rather than clean bathrooms. Overcome by shock, he carries a fish tank to make an errand for fish food since Nene seemed to miss breathing through her gills, before Nene happily exclaims that she loves cleaning bathrooms.

During the next schoolday, Nene is sitting in her classroom during an English lesson. She becomes dejected at the thought of toilet cleaning again and noted that things won't work out with Fuji-kun after all, especially when Hanako-kun is the one using her and keeping watch with one of his hakujoudai. She roves over her textbook and notebook, which are drawn with what she looks like as a fish, several flowers and ice cream cones, and a clothing set. As she becomes exasperated with having to deal with it, something is seen to be hiding under the student's chair behind her, opening one of its eyes.

As the teacher calls on her to read a page, Nene stands up before noticing all of her belongings and brooch are now missing on her desk. After class, she is unable to find any of her missing things before Aoi comes over to water the plants. She cheerfully inquires that maybe Yousei-san took it. She points to the hallway, explaining that there was a rumor going around about a creature stealing items. But you must never look at Yousei-san, for if you do, it will take your life too. But such is the rumor that other students in their class are also missing important items as well. Aoi notes that perhaps Yousei-san really does exist, to which Nene says, "No way," before a voice directs their attention. It is later shown that the locker doors are also missing, causing worry amongst the students. The creature begins to appear in the shadows and knocks Aoi into spilling the watering can over Nene. She quickly apologizes, but before Nene can finish reassuring her, the pink scales begin to form on her cheeks. She dashes off in another direction out of realization, seeking refuge in the old school building. The hakujoudai briefly bumps against her head before Nene stands up to look for something to wipe the scales. Looking back, she coincidentally finds a blue towel behind her. As she cleans her scales, she realizes more of the missing items are here too. She also finds her missing items and brooch lying on the floor, and she begins to follow the trail of items to a nearby door, already getting a bad feeling. As she quietly peeks through the door, the creature is there, who soon notices her presence. Nene gasps out of shock, but before she could escape, the creature's hands grab onto her legs after she saw them. She begins to tear up, fearing the worst from the rumors, but before the hands could get her, Hanako-kun appears. He summons hakujoudai to his aid, scattering the creature into pieces. In the aftermath of the event, Hanako-kun comments on her attraction to handsome guys and apparitions, before noting that humans can die so easily. Nene realizes that she needed him to save her again until a pink creature bumps against her head.

Looking down at them, they appeared to be bunny-like apparitions with an affinity for mischief ever since ancient times. Hanako-kun explains that they are Mokke, creatures that cluster together when they attack something. Nene begins to mesmerize at them for their cuteness, and they explained that they didn't want to kill; only that their story had changed. Because of the rumors circulating in the school, apparitions must fit their criteria in order to keep existing in the living world. Hanako-kun asks if she was willing to help change the rumors for them, for his duty as one of the Seven Wonders is to monitor all apparitions and maintain order in the school. He must eliminate those who are murderous, but for a human such as Nene, she has the ability to change the rumors and save them. The Mokke also pleads to her about their wanting to live here happily as well, to which Nene determinedly accepts. She says the Mokke shows a resemblance to her old hamster, White Inferno, because of their chewing styles. But also because Hanako-kun had saved her once again, to which she graciously thanks him. As she follows him up the stairs, she questions if this was the important job she had to do, and he responds he had planned to wait a little longer. Nene exclaims if she was able to graduate from cleaning bathrooms, but Hanako-kun steadfastly refuses. The two of them then walk onto the school's balcony, as Nene watches Hanako-kun overlooking the city with an almost fading appearance. He confesses that he looks forward to it, similar to the nostalgic feeling of having a friend. Nene slowly grabs the back of his jacket, and for the first time, calls him Hanako-kun as a friend. The two of them laugh cheerfully, and Hanako-kun asks if she knew what rumor she should spread. Nene says that she got it all prepared, and afterschool, she advises two girls that if they lost something, carrying a piece of candy will allow them to not lose things anymore. The girls ask where will she be going now, and Nene responds that she will be visiting a friend's place--before running to the girl's bathroom.

The Mokke are happily sliding down the stairwell with their candy before they are blocked by a blonde teenager. He inquires if they knew who Hanako is, but before he could get an answer, the Mokke flees in fright while leaving their candy behind. He becomes determined to find Hanako in order to exorcise him, frightening several students as they watched him laughing on top of the stairs.

Outside on the school balcony, Nene and Hanako-kun are on a picnic blanket, reading one of Nene's romance books. Nene begins to daydream about a prince falling from the sky, but later implies that she isn't actually serious about it since she could tell between reality and fiction. But ironically so that she became an apparition's assistant, giving her justification to wish for a special encounter. She tells of a poor girl who is captive by an evil spirit before the prince falls from the sky. The prince then slays the spirit and the two of them live happily ever after, shocking Hanako-kun since he's the evil spirit getting exorcised in that daydream. He then gets the book in order for Nene to not to get any dangerous ideas before cupping her cheeks, saying she has him.

Suddenly, a boy appears on top of the school roof, aiming his umbrella at the two. He leaps down, introducing himself as a student from Junior High, 3rd year named Minamoto Kou, which inadvertently dissuades Nene into thinking he's not actually the prince from the book. But she questions if Hanako-kun knows him, to which he says he must be the descendant of the legendary warrior who exorcised youkai, Minamoto no Yorimitsu. Kou declares that protecting people from wicked apparitions is a duty, which includes exorcising Hanako-kun.

He aims an attack on his shoulder, but before Hanako-kun could taunt his abilities, a sudden lightning struck caught him off-guard. He faints to the floor as Kou wields his weapon, the raiteijou, a tool that was passed down for generations which converts the wielder's spritual power into demon-slaying lighting. But before he could strike the final blow, Nene adamantly stops him, causing him to stumble back. Kou questions who she was, as Nene introduces herself as a first-year high schooler who is also Hanako-kun's assistant and friend. Kou confesses that Hanako-kun is a very evil apparition that must be exorcised for the sake of school, considering the weapon he wielded was a kitchen knife, proof that he had murdered someone when he was alive. Kou recounts that his grandmother barely sealed him away. Nene hesitantly doesn't believe it before Hanako-kun aims his knife at Kou's neck. He summons his hakujoudai, forming a matching cloak as he affirms he had killed someone. However, God allowed him the chance to absolve his sins by fulfilling the role. Kou angrily chases after him, making every attempt to strike him before Hanako-kun catches his weapon again. Laughing at his second attempt as the lightning struck, he becomes surprised that the lightning was absorbed back under his grip. Hanako-kun playfully waves his knife around before proposing to get the staff. Kou adamantly refuses before his staff was released by Hanako-kun, making him fall to the floor. He then towers over him, readying his knife, before Nene gasped as Kou flinches in fear. Seconds after, Hanako-kun cheerfully flicks his forehead before placing a permanent seal on the staff in victory. Kou attempts to scratch off the seal with no avail, demanding it be taken off before Hanako-kun notes the burned marks on his palm. Hanako-kun says he has high hopes for him to become a great exorcist by mastering his skills, but before that, Kou receives a fatal blow to his stomach, ultimately passing him out. Nene rushes over to see if he's alright, to which Hanako-kun says he will wake up due to perseverance before she retrieves the staff and suggests it be kept for safe-keeping. Hanako-kun asks her if that meant she was worried about him, but when she still calls him her friend, he solemnly remarks that she could still be friends with murderers, even after knowing the truth.

Hanako-kun assures it was a joke before saying he was ready to welcome the excitement presented by Kou's appearance. He gravely remarks that there will be more excitement in the future, as Nene realizes she didn't know anything about him. 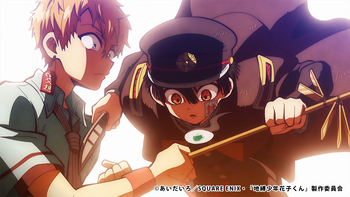 Retrieved from "https://hanako-kun.fandom.com/wiki/Episode_2?oldid=17904"
Community content is available under CC-BY-SA unless otherwise noted.