The Little Mermaid (人魚姫, Ningyo hime?) is the twelfth episode of the Toilet-bound Hanako-kun anime and the final episode of Season 1.

Kou and Mitsuba have met again, and Kou can't seem to sort out his complicated feelings towards Mitsuba not remembering him.

"Maybe it'd be better if I were a supernatural too..."

As she whispers, the Mermaid's servants appear in front of her...![1]

Nene made it back from the Hell of Mirrors in one piece, but she worries about what Hanako may be hiding from her. Just then, a strange fish appear, calling her their princess and asking her to join them as the mermaid's successor.[2]

Nene is in her bedroom, currently feeding a sunflower seed to her hamster, Black Canyon. She reminisced on the recent events of seeing Mitsuba in the Hell of Mirrors boundary, including the demise of turning into the new No. 3 due to Tsukasa's torments. She immediately becomes nervous for how Tsukasa will treat him after that, but realizes Kou must be worried as well due to his brief history with Mitsuba. Kou attempts to keep up a smile after explaining his meeting with Mitsuba, who had already forgotten about him, before leaving the school that evening. Behind Nene, there is a couple of fishes surveying from a puddle in the floor.

The next day, as Nene is seated in her class during a lecture about history, Hanako greets her unexpectedly by standing on her desk. She instinctively yelps, fuming as she hides her face behind her notebook. Hanako reasons that he just wanted to see her, before tuning onto Aoi, who becomes more and more concerned by her friend's talking to herself. Hanako begins by untying one of Nene's pink ribbons, relinquishing one of her braids. He asks what's been on her mind, to which Nene scribbles down notes about her concern for Kou. She says Kou must have felt lonely since Mitsuba has forgotten him, so she was wondering if there was a way to cheer him up. She turns to look at Hanako for any ideas, but Hanako deliberately hugs Nene after asking if she was only worried for Kou. She becomes stunned by Hanako's sudden embrace, before blushing frantically by Hanako's choice of words due to how close he was. She pushes him away from her, but Hanako's sullen expression proved otherwise when he played with her fingers. Nene realizes he really must have been worried for her, while Hanako occupies himself with brushing Nene's hair. When Nene sees her reflection in the mirror that Hanako handed, she screams at her atrocious hairstyle made to look like a pointed radish. She receives a light scolding from the teacher before lunch begins.

Aoi and Nene are having lunch in the school classroom, and Nene professes that perhaps different species aren't meant to understand each other after all. Aoi confuses apparition for abalone when she asks Nene who she had fallen in love with. Nene becomes dismayed by how many times Hanako had teased her yet doesn't reveal much about himself. His past self made Nene pitied him, thus leading her to not leave his side. She wonders if it were better if she became an apparition herself, until a boisterous voice interrupted her thoughts. She interrogates into thin air, before being told to look down: spotting a pair of fish in a puddle on her desk. She immediately rushes out of the classroom before Aoi could get an answer from her.

She clings onto a tree in the schoolyard, threatening that if the fishes lay a hand on her, they'll get a punishment more severe than burning. The fish, unconvinced, continue to explain their purpose for being here. They promise to get her away from the reaches of the loathsome No. 7, due to having a part of the Mermaid inside of her. Because of that, Nene is destined to become the next ruler after having swallowed the Mermaid Scale. She is told that she will become the next princess, for her extraordinary beauty could hook any man to her side. But before she could say anything else, the branch snapped, causing her to fall to the ground and groveling in pain. The fish persuades her that it would be better to leave No. 7, especially when he didn't accept her donuts and had treated her roughly in previous events. The Mermaid, however, is more caring and well-respected by her followers. The pufferfish offers her the Mermaid's lifeblood to drink, which will allow Nene to formally create a bond with the Mermaid instead. The fishes then give her a day to decide whether or not she will join them. A green hakujoudai is seen surveying the scene before returning to Hanako-kun.

Nene convenes with Aoi after school for advice on whether she should cut ties with someone. When Nene questions to Aoi about what would she do if the other person wasn't interested in them, Akane intercepts by saying he wouldn't give up. Despite his morbid declaration of love, Aoi scores his confession as a measly five points. Next, Nene is seen sitting on the school's former Misaki Stairs, with Yako on her lap. She advises to go for it, with Hanako being personally described as a willful brat, and that supernaturals and humans shouldn't mingle together for too long--with the exception of Misaki. In the science prep room, Tsuchigomori nonchalantly agrees with accepting the offer, for the deal of becoming a princess without any qualifications seems hard to pass up. Nene adamantly disagrees, figuring Tsuchigomori would be the one to dissuade her at first. She then asks questions regarding Hanako's past, considering Tsuchigomori's long history with him. But Tsuchigomori says that's for Hanako to answer, but seldom divulges about it due to the fact he doesn't want to let Nene know. However, she is met with boisterous laughter from the supernatural, saying she's been acting way too soft with No. 7. After Nene leaves the room, No. 5 reveals Hanako-kun hiding behind the curtain after hearing their conversation.

When Nene meets the celebratory fishes again in the schoolyard, she deftly refuses the offer while handing the Mermaid's lifeblood back to them. She reasons that she doesn't want to leave while things were in the process, and says that she doesn't believe that Hanako's intentions were just using her. The fishes become desperate by the refusal, thus leading them to lay out ink printings of future suitors in order to persuade her. While in mid-sentence, the girl is pulled into the depths of the sea, with the water causing her to transform into a fish. The pufferfish praises her for having such wonderful features, which causes Nene to feel disbelief by the fact they were only adoring her fish form. The pufferfish ushers Nene to join their world, convincing her to throw away her hideous features and bad judgement of men in exchange for a better life underwater. The last word struck her fully mesmerized by the possibility of popularity, and the pufferfish happily uncorks the lifeblood for Nene to drink a drop. But before they could do anything else, a large net scoops Nene out of the water and into Hanako's arms, with scales still dotting her human skin.

The fishes became furious by No. 7's surprise visit, demanding that they release their Highness. Yet Hanako simply brandishes his knife, threatening to make them into sashimi if they got too contemptuous. The pufferfish and the rest of his comrades retreat back into the waters, vowing they will come back for her soon. After comically waving back to them, Hanako responds that Nene thought a harem would be nice when given her dubious statement. But she confesses that perhaps becoming an apparition would make her understand him more, even though her supposed lack of value to him made her tear up. However, in a soft voice, Hanako sends his gratitude to her after wiping away her tears. His hand gently rubs the top of her head, revealing that it was his first time a girl said she liked him. While walking away, he also reveals that he had a little brother, except that he killed him. With a remorseful expression, he holds up his pinky finger while asking if she will still be his assistant until then. With that promise, he would decide whether or not he will tell her everything. The two hook their fingers together as Nene nods in agreement.

Back in the broadcasting room, Tsukasa messes around with the broadcasting radio until Sakura reprimands both him and Natsuhiko for their unacceptable behaviors. Mitsuba flinches from the sudden backlash of Sakura's microphone hitting Natsuhiko's head, making him wonder if it's still okay for him to stay here. Natsuhiko reassures him that it's his decision, but the pink-haired apparition winces when Tsukasa slams his hand against the wall. Black paint is sprawled across the tiles, with Tsukasa's fingers working to create mysterious drawings. He squashes another spider, asking what they should play next while referring to Amane.

As the school bell rings, Kou is seen sitting back in the classroom. He grips his umbrella harder after his past memories of Mitsuba, before vowing that he will get stronger to retrieve him back. Teru secretly wishes him good luck, before looking down at a Mokke carrying a pouch full of summer vegetables, a gift from Nene to Kou.

Nene smiles after hearing two girls talk about Hanako-san, and knocks on the rumored door to call him out. But instead of jumping from his touch, she caresses the hand on her shoulder. Hanako's expression softens at her cheerful greeting, and the two are seen holding each other's hands in the afterschool sun. 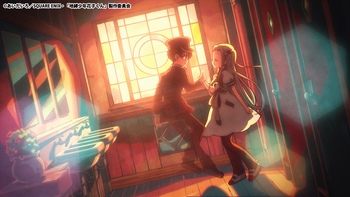 Retrieved from "https://hanako-kun.fandom.com/wiki/Episode_12?oldid=20821"
Community content is available under CC-BY-SA unless otherwise noted.