Aida (あいだ)
Iro (いろ)
AidaIro (あいだいろ) are the authors of Jibaku Shounen Hanako-kun. They are a team consisting of Iro, the writer, and Aida, the illustrator of the series.

They are also the creators behind several older works, such as the Fox-Masked Guardian Spirit and a visual novel, Narisokonai Snow White (alternatively known as Half-Baked Snow White).

Once upon a time in a country called Engelland, there lived a slightly selfish and narcissistic but still very beautiful little princess.

"Hey Estelio, who's the fairest of them all?"

"Why, Princess, that would be yourself."

The princess was much beloved for being the most beautiful girl in the country, but one day her father remarried, and her new stepsister Nocsia was even more beautiful than she, and with a much more agreeable personality--

This is the story of a slightly selfish princess and her manservant, a boy as brutally honest as a mirror.[1]

It’s exam time at Lumieria Magic School and apprentice witch Killey is busy studying. Her familiar Nica offers to take care of the house during the exams…will this clumsy familiar find a way to help his mistress?[2]

All children belong to god until they turn seven.

"Until the day you turn seven and become a child of the humans, I will protect you."[3]

A love that began from a single love letter...?! 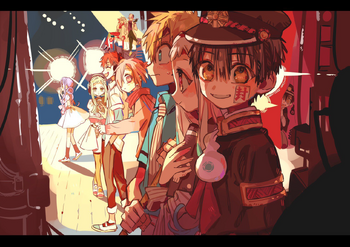